I take a look back at a project which saw me immerse myself in the world of Tudor gardening to design an authentic recreation of a knot garden.

As part of my Level 3 Horticulture Diploma I had the opportunity to conduct an investigative project. It could have been anything horticulture-related and that really opened up a world of possibilities. But, after a lot of thinking, I decided I wanted my project to combine my interests in garden history, formal gardens, and design.

The ultimate aim of my project was to research, develop and design an authentic recreation of a Tudor knot garden. I conducted a lot of research into the history of knot gardens and medieval plants, diving head-first into a wide selection of books and online literature to get an accurate idea of gardening and plants from that period in history. The oldest literature I used was Thomas Hill’s ‘The Gardener’s Labyrinth’, which was published in 1577, and he spoke of “complicated patterns” being “outlined by low, close-growing plants”. I made sure to accurately research knot garden uses and styles, as well as the planting to ensure the final design would be fully authentic to the period.

I even got nerdy and looked deeply into knot theory and development – finding the information to teach myself the principles behind Celtic knot patterns in order to be able to design the knot for my garden. I decided on a design with three interlinking shapes and four smaller ovoid shapes to create compartments that would all be filled with planting.

I decided that the knot itself would be formed of herbs, rather than box that is commonly seen in recreations. I opted to use rosemary (Rosmarinus officinalis), common thyme (Thymus vulgaris) and savory (Satureja douglasi) for the knot pattern, with narrow leaved mock privet (Phillyrea angustifolia) forming a large central dome.

Herbs were always the mainstay of Tudor knot gardens, so I chose 18 herbs commonly used in the period, including different varieties of thyme, marjoram, lavender, jasmine and savory. The herbs were predominantly shades of pink, purple and white, which I thought would work really well against the contrasting shades of green and grey foliage in the knot.

Most modern recreations tend to have fine gravel within the compartments, but Tudor examples would commonly be completely filled with plants – so I chose that latter approach. In my design every space would be filled with herbs or plants that were used in Tudor times in Britain. It meant an extra dimension of detail and time, but in my head I thought it would make the final design much improved.

So I chose a range of plants which, through my research, were commonly seen and used in the period and picked them to compliment the colours of the herbs, giving a solid colour pallet as well as colour and interest throughout the year. Around 20 plants were picked, in various shades of white, blue, pink and yellow predominantly.

Overall it was an enjoyable experience immersing myself into the world of Tudor gardens, helping build on my knowledge of garden history and also developing my design skills. I am very proud of the final design I came up with and, if I can say so myself, I still think this design would work well if it was implemented as a recreation somewhere. 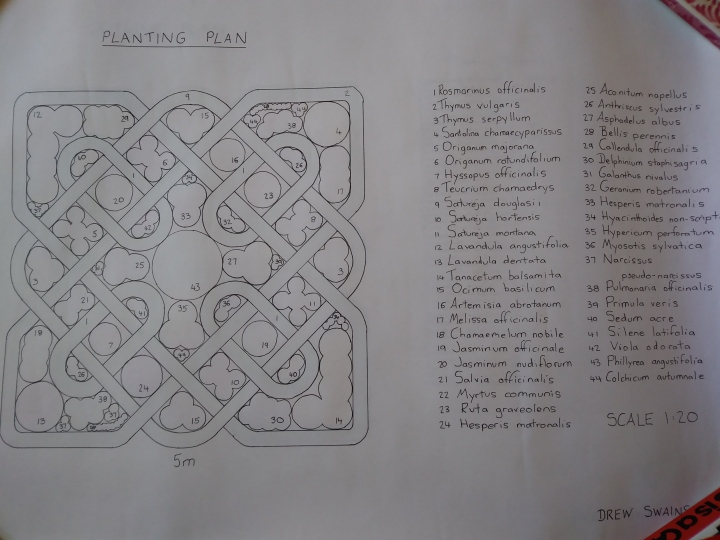 The time came to lift all the squashes and pumpkins. Was a big old job as someone (namely me) might have got a bit carried away with how many plants we had. But I'm happy with the overall haul..a good selection of types and sizes.
More apple abundance, this time a selection of the cooking varieties picked in the walled garden 🍏
Harvesting aubergines from the #polytunnel . Not a bad harvest overall, but there was some big enough you could play rugby with. Also discovered a lot very badly nibbled by slugs, pesky things
Sowed field beans as a green manure in the walled garden to follow the summer legumes. It is a great option as an over-wintering green manure. The field beans have deep roots to penetrate the soil and break it up, and it fixes nitrogen too. A double-win.
How do you like them apples? 🍏 Nerding out on apples at Acorn Bank, here's some highlights:
Sowing the seeds of microgreens 🎤 🎶 .......it's not quite as catchy a song title.