One of my little projects at home at the moment is my attempts to grow Dahlia ‘Bishops Children’ from seed. This is my first attempt to grow dahlias from seed, and I admittedly went into it not really expecting much and seeing it as a bit of an investigation.

I think dahlias are fantastic and love their vibrant, showy booms that come into their own from mid-summer deep into autumn. I used to have some tubers of Dahlia ‘Arabian Night’ that I was lucky enough to get while volunteering as a gardener at Hanbury Hall.

One day I had to lead a team to pot up hundreds of dahlia tubers of quite a few varieties – we potted up this many as Hanbury was a hub that grew plants in numbers to be distributed to other Trust properties and sold in their retail centres. So we had a massive number of tubers to plant up – which took all day – and I was able to take a few of the small left-over ones at the end.

I took these tubers home and planted them up in pots in my back garden and loved the plethora of dark-red double flowers that ‘Arabian Nights’ produced, lasting all the way up till the first frosts. It was far-and-away the best-looking thing in my garden that summer and I made sure to avidly deadhead to ensure it continued blooming as long as possible.

As you are supposed to, I lifted those tubers once the cold struck and cleaned them precisely to store away over the winter. They were neatly tucked up in newspaper in a shoebox. Unfortunately those tubers never went on to bloom again as a number of factors meant they weren’t potted up again the following spring – it was really regretful that they remained a one-summer treat.

When doing a count of the seed packets we had around the house, I stumbled on some Dahlia ‘Bishops Children’ from Mr Fothergill’s seeds. So I thought this was a good opportunity to sow them and try to enjoy these dramatic pink, purple and orange blooms all against the backdrop of its dark crimson foliage. It looks the prospect of a fantastic display.

However, I went into this knowing you need patience growing dahlias from seed rather than going the common route of starting them from tubers. Tubers are fast and consistent, whereas seeds take time. The plan is to grow these plants and then lift the (albeit tiny) tubers this winter in order to store them and this time I will re-plant them next year. If this project is successful it could be an ideal way to increase my dahlias year-on-year.

I only sowed in moderation as saw this as a bit of a trial. Sowed only a half centimetre deep in regular compost I put the seeds in my heated propagator on a windowsill that gets decent light.

What was I worrying about? I shouldn’t have had such worries as, within a week, there was positive germination and some healthy-looking seedlings. A couple of weeks later and I have some fantastic seedlings, it won’t be long until they need to be transplanted and grown on. Looking further ahead, once potted up grown on they would be planted in their final position outside once the frosts have passed.

My plan is to update this post as the project continues, with more details and pictures as they are potted on, planted up, ready to bloom etc. etc. ……….…so stay tuned. 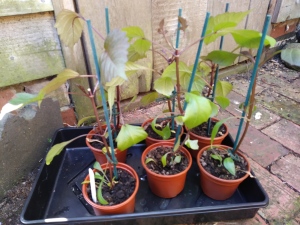 It is now a couple of months later since the original post on growing dahlias from seed and I am delighted to say that the plants are prospering.

The initial worries about how successful the seeds would be proved to be unnecessary, as the plants have grown big and strong and admittedly surpassed my expectations.

After potting up the seedlings I left them to grow on a windowsill that got a lot of light but wasn’t above a radiator getting constant heat through the cold months.

The plants continued to grow, and grow fast, so they were given supports in the shape of green sticks and then I made the decision to pinch them back as they were developing so quickly.

In the end I pinched them back by about 10-15 cm, to a strong leaf node, and that has

encouraged the dahlia to branch out new stems– which should mean more stems producing an increased number of flowers.

I have been so impressed with how easy it has been to grow these Dahlia ‘Bishop’s Children’ plants from seed and I do intend to sow more types of dahlia seeds in following years to further increase my stock of plants. I have already got too many plants, so have been giving some away to family members.

This experiment has, in the end, proven so simple and I look forward to a great display of dahlias this year, so I encourage people to try for themselves next year. I reckon I should probably do one more update on this blog to show the plants in glorious full bloom this summer.

6 thoughts on “Growing dahlias from seed”